No matter how many years we work out here, it's always great when dolphins come for a visit

Have you ever considered what super powers you would choose if given the chance? Mine would be a Disney princess-like ability to befriend wild animals. The closest I ever come to this feeling is out at sea, where everything from birds to dolphins and whales get curious and come to check us out. It always pleases me when animals visit R/V Sally Ride. And I’m not the only one, in fact the captain was the first person to join me on the bow when a pod of common dolphins came to play, a huge line of them “riding the bow.” 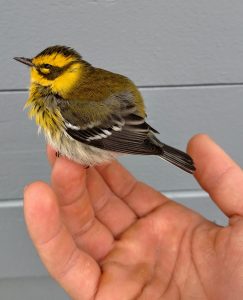 Townsend’s warbler, perched on and
photographed by O/S Daris Kenter.

They make it look effortless (see video above), as if they’re barely trying, and yet keeping just ahead of the ship. Captain Ian even showed me that if you put your ear against the inside of the bow you can hear the dolphins whistling to each other.

A few months ago, a Townsend’s warbler lived onboard for over a week, riding the ship from at least Newport, Oregon to San Diego. The O/S (ordinary seaman) Daris alerted me to its presence, and it could be found hopping around the 01 deck. Birds are the usual hitchhikers, and it wasn’t until I lived at sea that I could understand how they populate islands. Storms blow birds off-shore, and they look for the nearest land. Anything they can rest on in the meantime will do, and the Sally Ride must look like a welcome target to a weary bird not used to flying for days on end, and who can’t sit on water. Pelagic birds, designed for life, at sea can do both. 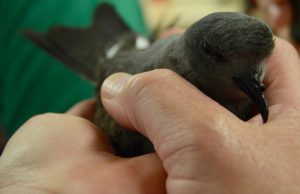 Observer Katherine holds a storm petrel that is
ready to be released.

At night, storm petrels seem to get confused by the ship lights and end up on deck. We find them in the hangar or along the rail, trying to figure out what went wrong. Releasing them again while we are doing operations just leads to them coming back, so they’re placed into a box until the ship is underway again. All non-necessary deck lights are turned off, the box is taken to the leeward side of the ship, and the birds are launched into the air, where they catch the wind and fly off.

More than once, a juvenile Peregrine falcon has tagged along for a few days of the CalCOFI cruise while the ship is among the islands, though often out of sight of land. It will perch up high (see below, photo credit J.Wilkinson/SIO-CalCOFI) and, every once in awhile, pick a direction and fly off. When it reaches some distance away and still hasn’t spotted land, it turns around and comes back. The first time we’re in sight of an island again though, it’s gone for good, likely not back to where it started.

#1701RL: young female Peregrine Falcon has been riding aboard for most of Line 77. Using her wings to keep her balance during a large roll:. pic.twitter.com/HompGk77sD

Other stories I’ve heard from crew members and scientists include a baby whale shark circling around the Revelle, a humpback whale scratching itself against the hull of the New Horizon, and a sea lion that came up the fisheries slide and fell asleep on the back deck of the Bell M. Shimada (see header photo, also by J.Wilkinson/SIO-CalCOFI) , one of NOAA’s ships used for CalCOFI trips. It’s usually a welcome experience, a bit of interaction with the natural world around us, and a good story to take home.