Bringing volunteers on a CalCOFI cruise is generally a win-win for everyone. For the scientists, having help deploying and recovering gear, sampling the CTD, and filtering water is key. For the volunteers, it’s a great way to gain experience working in the field. The usual applicants have finished their undergraduate degree in a science field and are sorting out what comes next – career, graduate school, change of scenery. My own oceanographic career started as a volunteer on a cruise on the retired SIO research vessel New Horizon. I was working in a chemistry lab on the main UCSD campus, but always found myself drawn towards the marine sciences. I went out for 10 days and loved every second of it. I knew this was the life for me, and so went about getting myself a job at SIO. It sounds like the volunteers onboard R/V Sally Ride are having similar thoughts.

Due again to the increased bunk space onboard R/V Sally Ride, there are three volunteers on this cruise. On some past cruises there’s only been room for one, in which case everyone is busier. Hanna, Joel, and CC have done great work on this trip, providing invaluable assistance to the scientists in the collection and processing of samples. 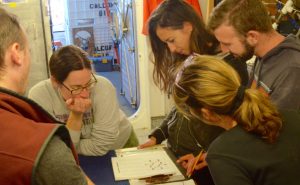 Hanna and Joel join other scientists in constant crossword
puzzles. Crew members contributed answers on their way
through the wet lab as well.

But they’ve also made sure to get a taste of life at sea outside of work. All three entered the cribbage tournament, and made it past the first round, despite never playing a hand in their lives before coming aboard. I’ve seen all of them around the communal crossword puzzle in the wet lab, and out on deck with the marine mammal observers. They’ve mingled with crew members at meals, and asked scientists for more information about their projects. I didn’t hear anything about them getting sick, even during the big weather day we had, nor did any of them show up to work late. Seems like they’ve all taken to life at sea – excitement working out on deck, boredom waiting out a storm, the long hours and no weekends, whale-watching, slow internet, new friends, missing home, bioluminescent displays – the whole package. 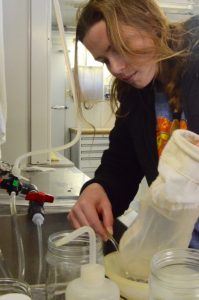 CC helps the fisheries group process
a sample from the bongo net.

CC, Hanna, and Joel are all recent graduates, with degrees ranging from Environmental Science and Biology to Computer Science. They did lab work during their undergraduate years, and all speak of a connection to the ocean. That is probably the biggest indicator of whether or not someone can (or should) make a career out of going to sea. Do you love it so intrinsically that you won’t get tired of it, day after day, sometimes month after month? If so, there’s some amazing opportunities and sights to see – if you’re willing to put in the work.

If you’re interested in being a volunteer on a future CalCOFI cruise, and have a scientific / laboratory background, click here for more information.