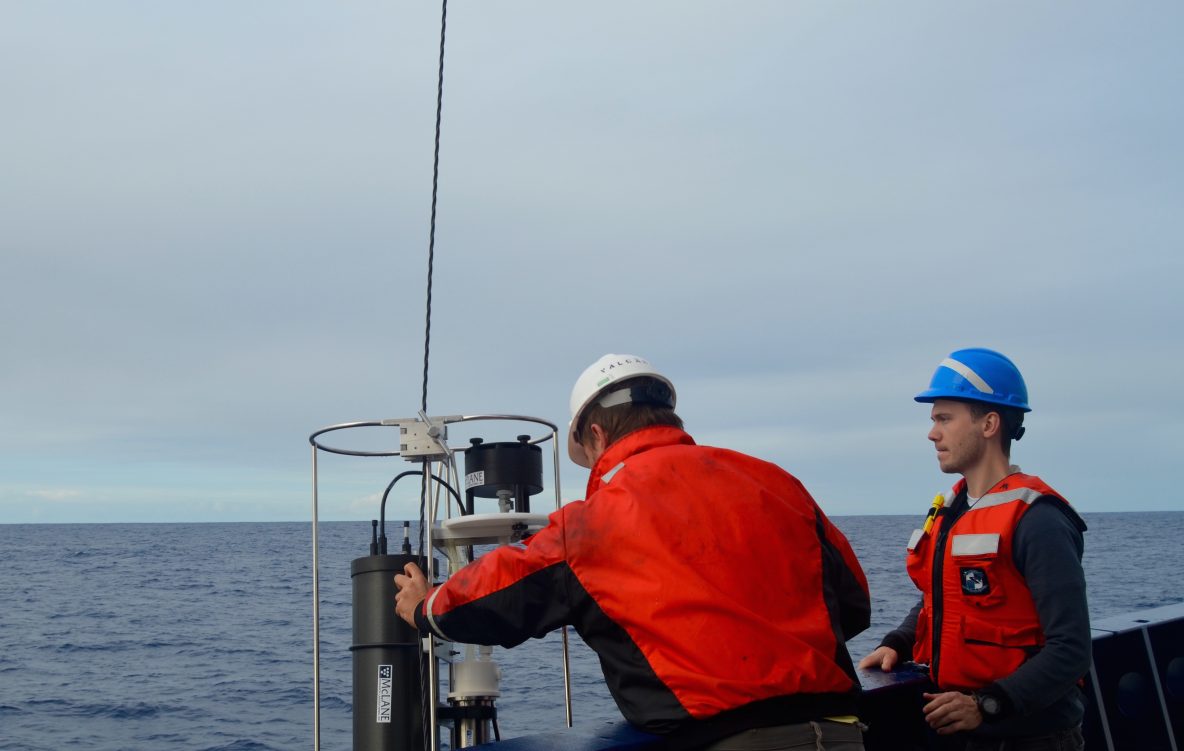 Since the CalCOFI program is well-known and proceeds on a predictable schedule (once per season), there are often scientists who ask for bunk space to come along – but they often have to settle for water samples to be collected on their behalf. R/V Sally Ride, however, has a higher number of science berths than many similarly-sized research vessels so the usual CalCOFI science party had room for a few extra people this time around. 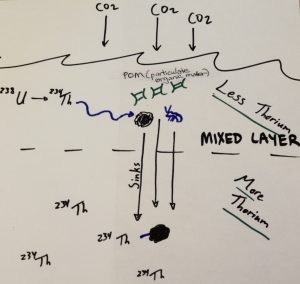 Tom Kelly, a graduate student from Dr. Mike Stukel’s lab at Florida State University, is one such addition. He is collecting data on naturally occurring thorium-234 in the water column in order to study the carbon flux pathway, which is the removal of carbon from Earth’s atmosphere via ocean processes. Thorium-234 is a byproduct of the decay of uranium-238, which has a half-life of over 4 billion years and is thus homogenous in the ocean (which turns over and mixes on a scale of closer to 1,000 years). Thorium-234, however, grabs onto carbon particles in the ocean and sinks, rather than mixing in evenly, so it is often in low concentrations near the surface. Its half-life is a mere 24 days. By calculating the amount of thorium-234, as well as the carbon to thorium-234 ratio, data on the sinking rate of carbon (and thus its removal from the atmosphere) can be determined.

Tom collects water at various depths from the CTD, adds reagents, and filters the samples.

Tom takes samples from the CTD niskin bottles closed in the mixed layer, which consists of the top 50 or so meters of water that is all mixed together due to wind and wave action. He also collects water from a few deeper bottles – CalCOFI CTD casts generally go down to 515 meters. Tom then adds reagents to the water samples that precipitate into particles, which thorium-234 will grab on to. When the water is passed through a filter, the particles collect on the filter, and with them the thorium-234. The filters are then dried in a food dehydrator purchased just before the cruise as a substitute for the usual bulky lab oven. Tom then inserts the filter into a beta counter, which quantifies the amount of thorium present by detecting its naturally radioactive state – a process that will be continued back in the lab in Florida. While it’s being analyzed, the sample has to be surrounded by lead bricks in order to block out the background radiation in the lab, which is far higher than the level being analyzed on the filter.

The filter is then dried and analyzed using a beta counter. 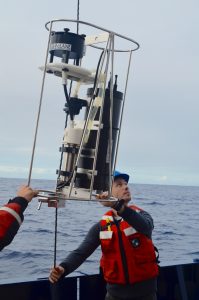 Yesterday, Tom deployed a McLane pump to a depth of 100 meters, which is below the mixed layer – any particles deeper than this are unlikely to be mixed back in to surface waters. Over the course of 45 minutes, 333 liters of seawater were pumped across a filter, which will be analyzed for thorium-234 and for carbon. This in turn will allow Tom to determine the carbon to thorium-234 ratio and convert all his thorium data to carbon values. It’s important to understand the rate at which the oceans are removing carbon from the atmosphere.

It may be that Sally Ride‘s ability to carry a large science party will encourage collaborations such as this to thrive on future cruises. If there’s one thing we know as oceanographers, it’s that all these systems are connected. Earth, ocean, atmosphere; chemical, biological, physical – you can’t study one without the other.