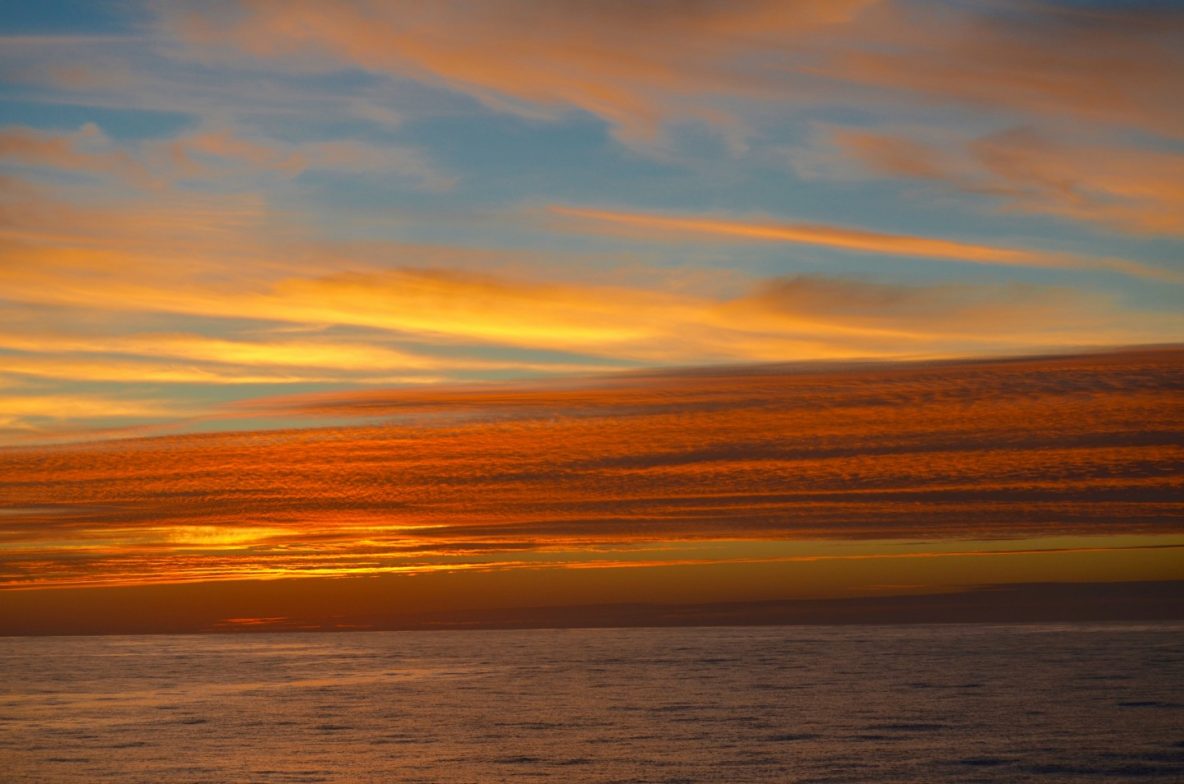 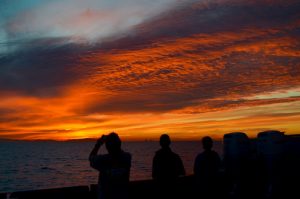 Saturday’s sunset off the coast of LA was particularly photogenic. 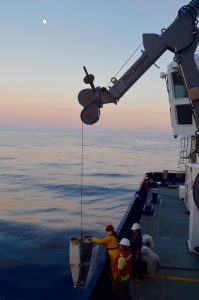 On the other side of the ship,
sunset colors and a moon rise.

You may think that as oceanographers and mariners, the scientists and crew members aboard R/V Sally Ride might be immune to the beauty of the natural wonders around us. But we’re not, even after many years and many miles – and I think that’s exactly why we’re in this line of work. We don’t get tired of seeing gorgeous sunsets, leaping dolphins, or starry nights. In fact, word spreads around the ship when there’s something to be seen. A few nights ago, an A/B walking through the lab on his rounds clued me in to the fiery orange sunset occurring outside. I saved my work, grabbed my camera, and headed to the fantail. A crowd had already gathered, crew and scientists alike. The sunset was off the port side as we sat on station, so those who were deploying nets off the starboard side missed the main part of the show, though it was still a lovely evening. 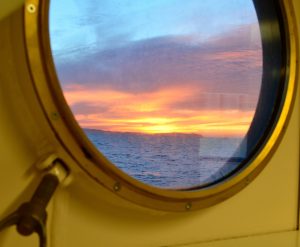 Even if stuck inside, sunsets out the porthole are still lovely.

It sometimes happens that you’re stuck in the lab during an event like this. Perhaps an instrument needs babysitting, or you’re in the middle of a time-sensitive task. In that case, you have to hope for a porthole facing the right direction. And try not to let the reflection of your computer screen in the glass lessen your enjoyment of the view, even if it does mess up your photos. I’ve even watched dolphins playing in the waves through a porthole in the lab, which is thrilling compared to looking at data charting on a laptop. 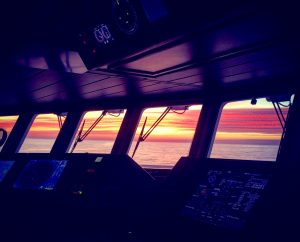 The same sunset, from the bridge. Picture by 2nd Mate Cameron Freels.

Watch-standers on the bridge obviously can’t leave their posts, but for sunsets at least this doesn’t affect their enjoyment. In fact, the bridge is a great place to be for many of the events that remind us of our love of the ocean. Crowds of albatross and other romantic seabirds following the ship, swirling through the currents at eye level, then dropping to skim within inches of the waves. Pods of dolphins on the move, swerving to ride the ship’s bow wake. The breath of whales on the horizon.

You’d have to ask someone else if the sunrises have been as spectacular. I’m working noon to midnight so never see those. With that shift split, it’s either one or the other, but at least each group gets some daylight and some time after dark. And with it, a good chance of some natural beauty.