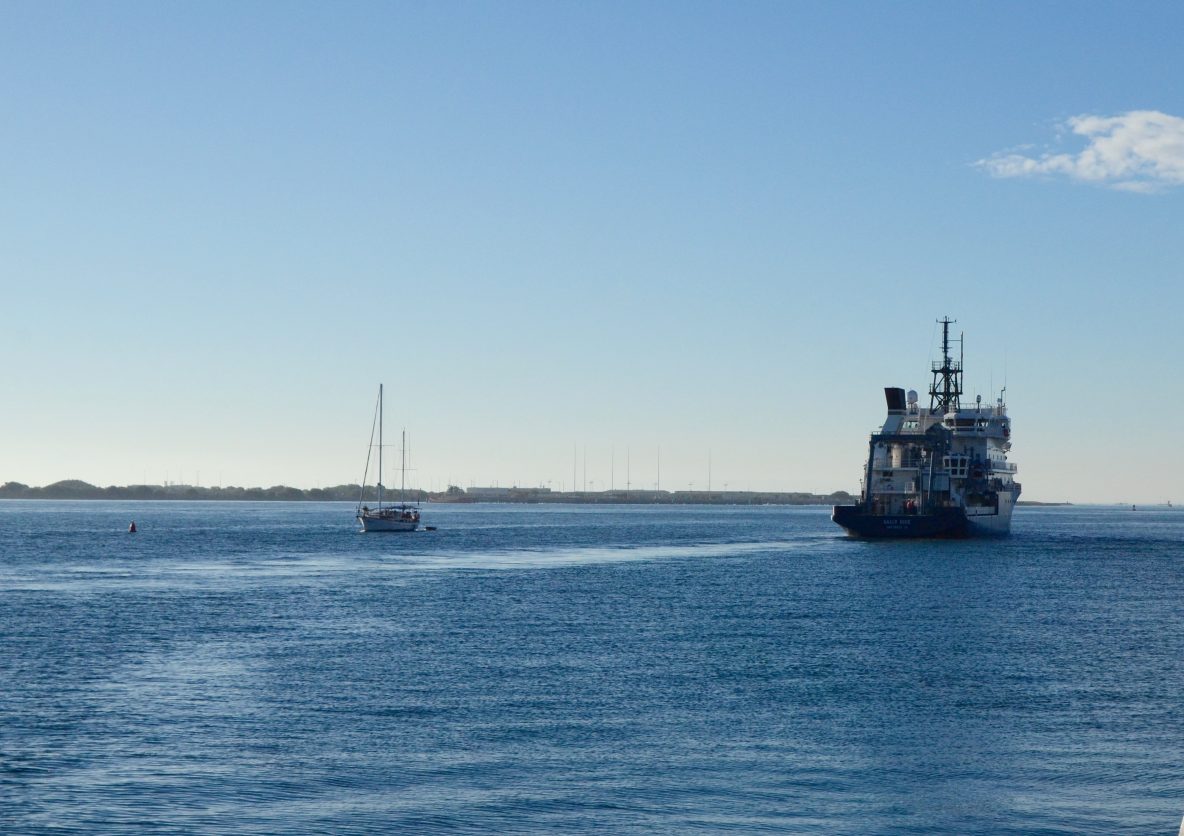 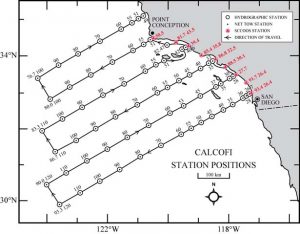 The usual CalCOFI grid of 75 stations.

The second science verification cruise took place on R/V Sally Ride last week. CalCOFI (California Cooperative Oceanic and Fisheries Investigations) is a collection of scientists from SIO and the National Oceanic and Atmospheric Administration (NOAA), that run transects off the coast of California once per season. Thus there are four research cruises a year, occupying the same stations, and sampling the same parameters. What began in 1949 as a study into California’s collapsing sardine fishery has become an important record of oceanic changes. The autumn trip will be the first official science cruise on the Sally Ride, taking place over 16 days in November. Coming aboard for a few days in advance of that trip to test out how everything will get deployed, recovered, and sampled makes sense for the scientists, and for the ship and her crew.

CalCOFI trips involve pretty much every science system and deployment apparatus onboard, and that’s saying something! A CTD is deployed on every station, being sent to a depth of 500 meters to collect samples throughout the water column. Sensor data, as well as analysis of the collected seawater, provides salinity, dissolved oxygen, nutrients, and chlorophyll concentrations. Various nets are also deployed along the starboard side of the ship, collecting plankton, krill, small fish, and other animals along the way. An acoustic array is launched from the A-frame on the back deck and towed as the ship travels between stations. Researchers record and study the data in order to understand marine mammal populations and behaviors. Observers are also located out on deck during daylight hours, recording all the birds and marine mammals seen from the ship. 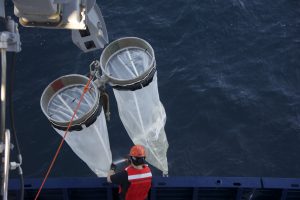 Chief Scientist Jim Wilkinson rinses the bongo nets after recovery.
This moves the captured material into a container called a cod-end.
Picture by Debbie Nail Meyer. 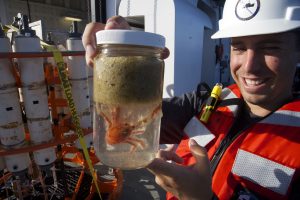 Everything in the net is then transferred to collection jars,
where it is catalogued and used to make inferences about
oceanic populations. Picture of technician Taylor Wirth,
krill, and a tuna crab by Debbie Nail Meyer.

Stay tuned for more pictures and posts from onboard R/V Sally Ride during the cruise in November, where I’ll be documenting the cooperative effort it takes to successfully run 24-hour science operations at sea for the first time on a new ship.