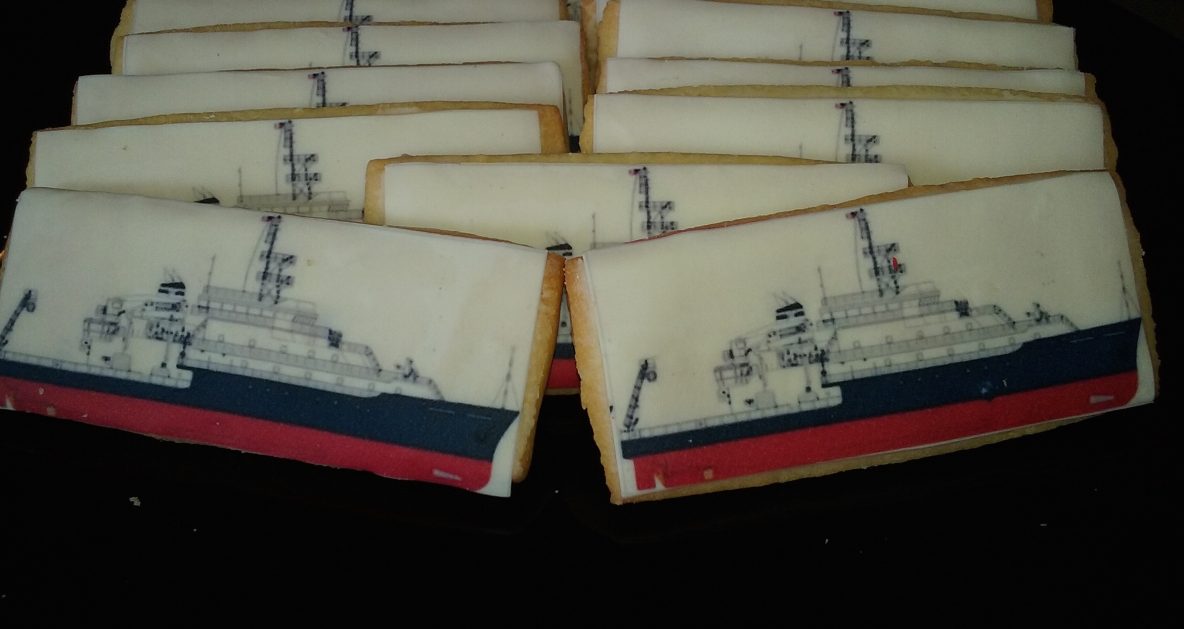 Photo taken by Erik Jepsen, UC San Diego publications, as he rode in a small boat around R/V Sally Ride off the SIO pier.

At least a hundred people came out to welcome the ship to La Jolla.
Photo by Erik Jepsen, UC San Diego.

R/V Sally Ride’s homecoming on August 26, 2016 was a big event. The ship’s home port is in Point Loma, about 20 miles south of La Jolla, where Scripps Institution of Oceanography is located. There is a pier at SIO, but it’s for launching small boats, instrumentation, and scuba divers – not ships like those in the Scripps fleet. So on our way south, the ship stopped by La Jolla to salute our home institution. The pier was opened for the SIO community (it’s usually closed off to anything but scientific purposes), and faculty, grad students, staff, and more came out to get a closer look at the ship. The captain brought the Sally Ride in as close as was prudent, performed a few pirouettes, and blew the ship’s whistle. I hope the people on shore appreciated that, it was SO loud from the forward decks of the ship. The captain would send out a quick warning over the radio, which a few crew members had on them, and we would all rush to cover our ears. It always seemed to happen just as I had lined up and focused my camera and therefore didn’t want to sacrifice the shot. At some point, the bridge decided to blast out S.I.O. in Morse code. I wondered how many people got it, but realized that many people know S.O.S. (3 short, 3 long, 3 short), which has two of the same letters.

Four boats of photographers, including one with a drone, circled around the ship taking beautiful shots of the historic homecoming. Then the Sally Ride took one last turn and headed out of La Jolla and down the coast to San Diego’s “big bay.” The boat with the drone followed us the whole way, getting some nifty footage. There was also a small plane nearby that got some great shots. Check those out here.

At Scripps, the party continued with a happy hour event that included cookies with a picture of the ship on them. Those of us onboard had a few more hours to go. Rounding Point Loma and heading into my favorite port, which I’ve done many times, felt different on this occasion. It was special, knowing it was the ship’s first trip and that, as the sun was setting behind the peninsula, coworkers would be waiting on the dock to see her come home. After tying up and lowering the gangway, I took a few last pictures and headed home. As on any first night back in San Diego, whether I’ve been gone for two months or just a few days, I picked up carne asada fries from my local taco shop, sat down on my couch, and toasted to another safe journey home.