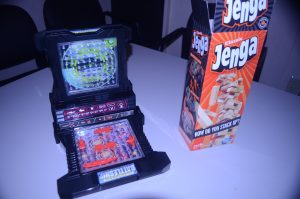 Win by sinking the most ships –
or lose because the ship moved during your turn.

Down time activities are an important part of life at sea. As such, the lounge onboard is usually occupied by scientists and crew alike, enjoying their free time before and after shifts. Requirements include comfy couches and chairs, a big screen TV, huge movie library, and a table for playing games. So far, the only two board games on R/V Sally Ride are Battleship and Jenga. To me, these seem like odd choices. One of them involves simulating firing missiles to sink ships. The other requires a level playing surface. 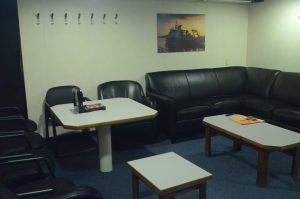 Unoccupied, but not for long.

It’s likely that the table in the lounge, and the ones in the galley, will be used for dozens of card games every cruise. I’ve also seen scientists make a Settlers of Catan game out of paper, q-tips, and other supplies while at sea (though this game seems particularly ill-suited to establishing friendships). Cribbage is always popular, and there’s sometimes tournaments that go on for weeks.

While we’re at it, doesn’t it seem weird that there’s a picture of the ship in the lounge? Though it’s a lovely print, I think I’d prefer to look at a picture of land, maybe the San Diego skyline. That being said, the couches are indeed comfy and crew members gather there after meals in order to relax and watch movies. As the ship is in service longer, I’m sure the movie and game library will expand.