For anyone who’s ever wondered what the difference between a ship and a boat is, or gotten reprimanded for using the wrong term, here’s a tip for remembering it: ships carry boats. The R/V Sally Ride is a ship. Onboard are two boats, the work boat (also called the small boat) and the rescue boat.

Today the Sally Ride’s work boat took its maiden voyage in Guemes Channel, between the shipyard dock and Guemes Island. Chief Mate Ian Lawrence coordinated the launch, and took the boat out for a quick spin to put it through its paces. 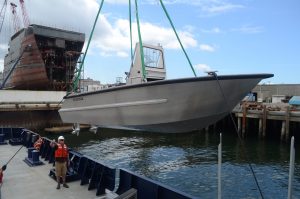 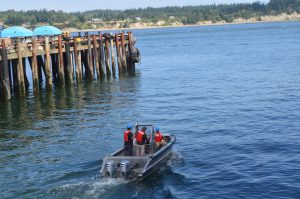 On some research cruises the small boat may be used to take surface seawater samples. The Sally Ride sits with about 14 feet of ship below the waterline, which mixes together the seawater to at least that depth. So for scientists who really want to learn about the differences of the surface water, climbing aboard the small boat and moving away from the ship in order to collect samples is necessary.

The work boat can be used if there’s scuba-diving operations, either for science or for ship repairs. It also serves as a water taxi, ferrying scientists and crew to shore if there’s no place to tie up. I’ve had to do this in various small ports like Dana Point, or in Punta Arenas, Chile after an earthquake damaged their dock. 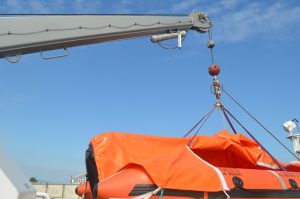 The other boat onboard is the rescue boat, which is attached to a dedicated crane so that it’s ready for immediate launch in case someone goes overboard. Thankfully, I’ve only seen it taken out for drills, never the real thing.