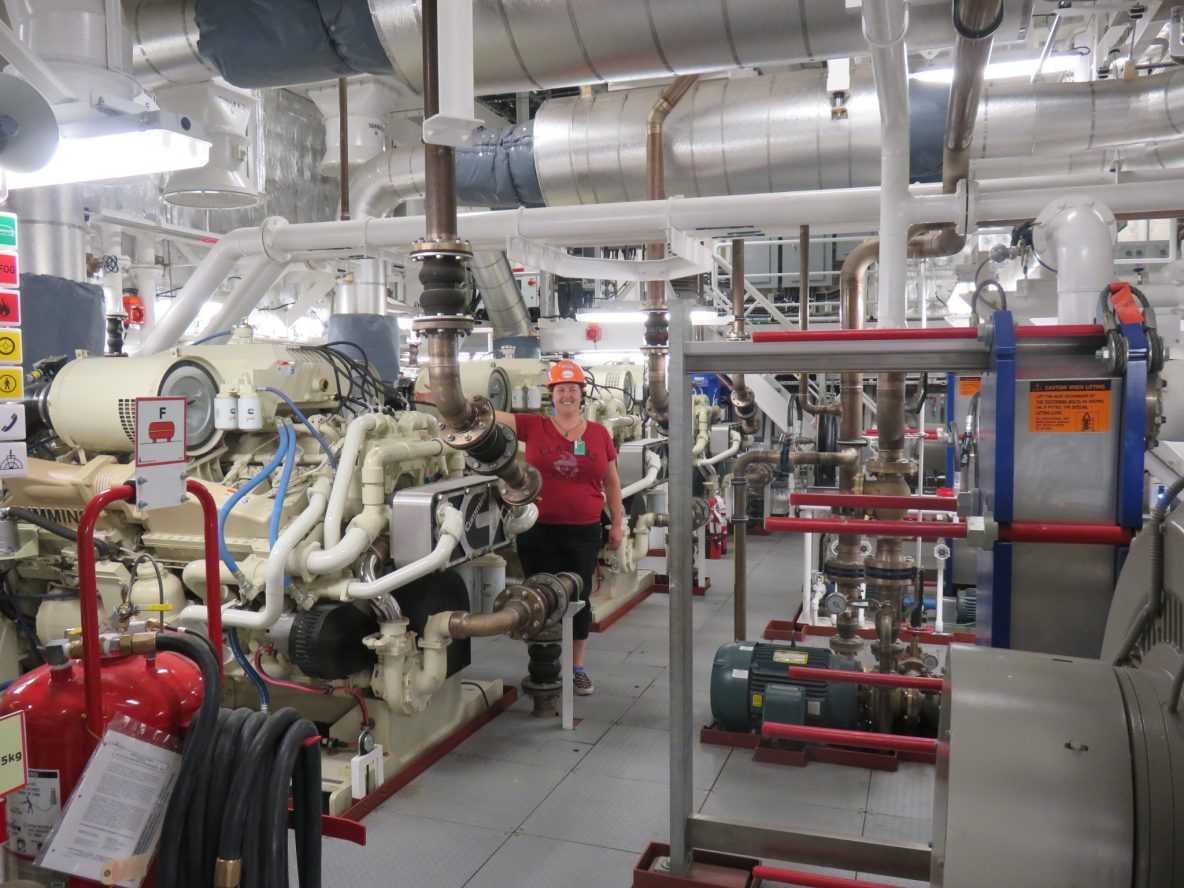 I find the engine room to be the most interesting place on any ship. It’s full of hundreds of valves, knobs, and buttons – none of which you’re allowed to touch. Chief Engineer Paul Beuren (referred to simply as Chief) was nice enough to show me around the R/V Sally Ride’s engine room. It’s so much more than the heart of the ship. If we’re going to continue with that metaphor, it’s also the mouth (various intakes), food (140,000 gallons of diesel), kidneys (filters), nerves (sensors and warning lights), and gut (waste treatment).

The engines create electricity that drive the propellers, moving the ship forward. They also run the systems that steer the ship, making it maneuverable. Electricity in the staterooms, offices, kitchen, labs – everywhere on board – is generated from the engines. Freshwater is made from seawater via reverse osmosis, also in the engine room. Seawater is also brought in to cool fresh water that is then sent through the engines to keep them from overheating. Gray water (from showers, laundry machines, and other drains) is sent here to be processed before being dumped overboard. The same goes for black water (sewage), which is processed separately with the help of microbes. If necessary, the ship could even be driven from a panel in the engine room.

It’s an easily overlooked place, by design it resides below the waterline in the bowels of the ship. Many crews provide engine room tours to scientists, an opportunity to see (but not touch!) all the equipment that’s been keeping you alive and on schedule for up to a few months at a time. Engine room crew members are much less visible than those that work on deck or the bridge, sometimes only coming up for meals. They are, however, usually easily identifiable, with their oil-stained jumpsuits and various hearing protection. If you see someone only occasionally and they have earplugs tucked behind their ears like a pencil – it’s an engineer. Fair enough, as it’s approximately 100 decibels in that space when the engines are running – roughly 8 times as loud as normal TV volume.

As I usually sail as a marine chemist, I’ve found that it is wise to keep up a good relationship with the engine room crew, as they’re in charge of providing distilled water to the labs, a necessity when making reagents for chemical analysis. It’s also nice to be able to bring your wet shoes to the always-warm engine room to dry after any particular rough seas experiences out on deck (no shoes allowed in the laundry room dryers!).