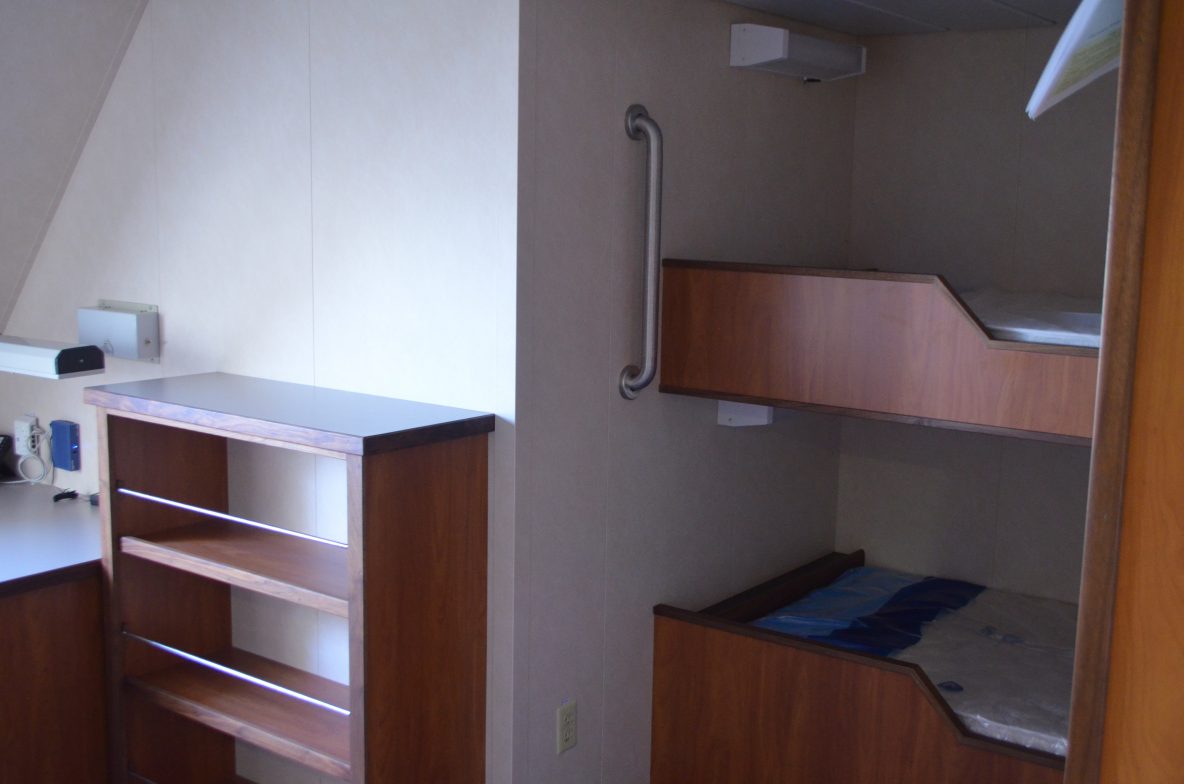 The focsle deck of R/V Sally Ride (one level up from the main deck) is home to the science party staterooms, where I will spend ten or so hours each day when I’m at sea. Generally, scientists work on the opposite watch from their roommate – twelve hours on, twelve hours off. That way you essentially have your own room, and you don’t have to worry about waking someone up or being woken up. There are lots of little details about the staterooms on the Ride that give me hope for many years of comfortable cruises to come. Click here for a 360 degree view of the Chief Scientist’s stateroom.

For one, the furniture is wood – which gives it a more home-like feel compared to metal. Plus, it doesn’t bang you up quite as much (or as loudly) when you inevitably run into a shelf corner or miscalculate your descent from the top bunk. I was recently on a ship with wood furniture that creaked. Incessantly. I quite liked the sound; it made me feel like I was below deck on an old sailing vessel, like a naturalist swinging in my hammock as we circumnavigated the globe. Then again, I can sleep through just about anything, and not everyone is that lucky – so there were some complaints. 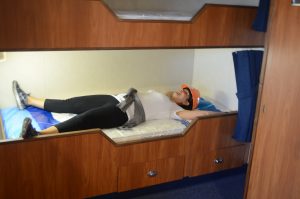 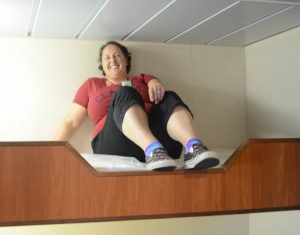 Sitting up in bed is a downright luxury!

Another thing I noticed is that the mattresses are full-width twins! This is major. I’ve only been on one other ship with full-width mattresses. It’s downright fancy. Usually they’re noticeably narrower, probably by eight inches. Coupled with well-spaced bunks, the Ride is going to feel downright spacious in terms of sleeping quarters. Many bunks on other ships are not evenly spaced, so that either the top or bottom bunk are not very tall. I’ve been on bottom bunks where the bed above seemed ominously close. Ditto on top bunks, with the ceiling right there over your face. I’ve whacked my head many a time, and just generally felt quite claustrophobic. That is not going to happen on the Sally Ride. I look forward to doing snow angel-like acrobatics, or at least being able to sit up, turn over, and get in and out without stress or injury. Small conveniences, like I said. 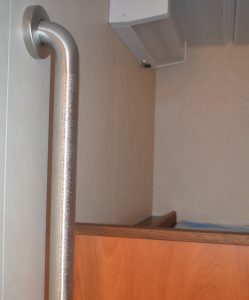 Top bunk, complete with light, power outlet, shelf,
and bar to help you get in and out.

Another detail is a light for each bunk, complete with an outlet for keeping your phone charged (oversleeping is frowned upon; after all someone else who’s been working for twelve hours is counting on you to show up!). On other ships I’ve been on, this is a trap. I often sleep with my head on the opposite side as the light, as it’s just one more thing to hit your head on. But not on the Ride. Here we’ve got a narrow shelf right under the light, perfect for keeping your phone, book, earplugs, whatever on – as well as providing a barrier so your head is not right under the light!

Side note: I read maritime books almost exclusively while I’m out at sea, and have little tolerance for them when I’m on land. I’ve been through Patrick O’Brian’s entire Master and Commander series (highly recommended), as well as some Jules Verne. Three years in, I’m still working on Moby Dick, again only when I’m at sea. It took me nearly an entire 60-day cruise to get through the first 200 pages, though I can say that I’ve never fallen asleep faster or slept better than I did that summer while crossing the Pacific. I think I enjoy maritime exploration books so much because they connect me to the parts of my job that are still similar to when they were written – traveling, the unknown, the adventure of it all. There is almost nowhere left on Earth that is the same as it was a few hundred years ago. But the middle of the ocean is still the middle of the ocean. Despite our GPS and myriad other instruments, we’re still explorers at the mercy of the sea. No rum rations anymore, but thank goodness for plumbing and refrigeration. 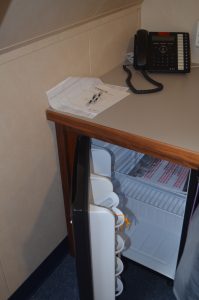 Speaking of which, the Sally Ride staterooms have mini-fridges! Fantastic! Despite the generally very good quantity of snacks onboard, it is so nice to be able to bring your own and have a place to stash them. 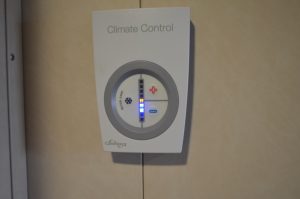 Another modern convenience that can’t be overstated is climate control. Each stateroom on the Sally Ride has a thermostat that is connected to the heating and cooling system. I’ve been on ships where it seemed this dial was just there to make you feel like you had control. Some rooms were always hot, some were always cold, no matter what you set the dial to. Sometimes thermostats are shared across multiple rooms, and you’re at the mercy of whoever has it in their space. Not on the Ride! Chief Engineer Paul Bueren walked me through how the ship uses seawater to cool various systems onboard – look for more on that in a post next week about my engine room tour.

All in all, I cannot wait to sail aboard the Sally Ride. I’m sure there are many more details someone in the design process thought of that I’ll eventually notice – and many more that I won’t, but are there to make our trips better, safer, and more enjoyable.