On June 18, 1983, Dr. Sally Ride became the first American woman in space. On June 27, 2016, I walked the gangway onto R/V Sally Ride for the first time. It’s a research vessel being built in the Dakota Creek Industries (DCI) shipyard in Anacortes, Washington, and will be Scripps’ newest addition to its research fleet. A swell of emotion began to rise within me, but was quickly choked out by paint fumes – an unexpected first impression. A DCI employee named Rocky was busy on the back deck, painting some metal pipes a basic grey color. Turns out he’s been at it for four years – painting both the Sally Ride and its sister ship, WHOI’s R/V Neil Armstrong, from top to bottom, inside and out. His last day of work before moving to a different ship in the yard was the following day. He estimated that tens of thousands of gallons were used, and I believe it. Only eight different colors though, he mentioned a little glumly. 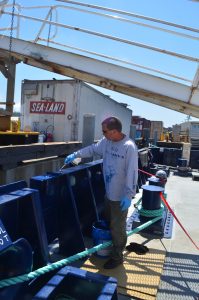 Rocky told me that his favorite part of the job was the outside decks (floors), which have to be non-skid. A layer of small pellets are sprinkled across the entire surface, a process called feeding the chickens, and then painted over – again in grey. The result is a surface rough enough to keep us from slipping when there’s water on the deck, which is almost always. Even with calm seas and sunny skies, there are waves splashing or overflow from an on-deck experiment on the back deck (also called the fantail).

On my tour of the ship later that day, I noticed that most every surface was painted – and those were just the ones I could see. Painting metal walls, decks, pipes, and even bolts helps keep rust from forming and corroding parts of the ship. I’ve been on research cruises as short as two weeks where there’s painting going on; it’s a constant battle with the corrosive seawater. This often occurs in tandem with needle-gunning, a dreaded process that uses a pneumatic chiseling device that removes rust and old paint, leaving the surface ready to be painted again. This always seems to happen on the deck directly above my bunk just as I fall asleep. 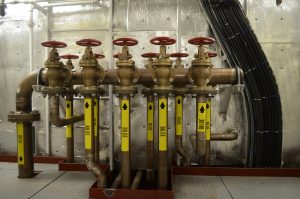 When I scoped out the engine room, the gleaming copper pipes made me realize that I’ve never been on a brand new ship before. I wonder how long it will be until oxidation takes over and dulls the shine. UPDATE: Chief Engineer Paul Bueren tells me these are a copper and nickel alloy and thus resist corrosion by seawater. I’ll report back if they’re still this shiny in a few years.

Making it up to the bridge was a real treat as well. Since the ship has yet to really experience the saltwater spray that will accompany it on most of its voyages, the windows are unmarked and so clean that it is hard to tell they are even there. The view is spectacular, especially with Mount Baker lurking in the distance. 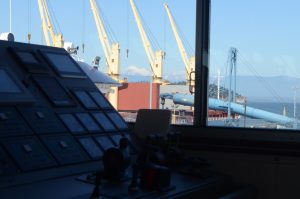 View from the bridge, across the shipyard.

We’re only a few weeks away from taking the ship out into the nearby straits and sounds to put it through its paces, testing out every system and piece of equipment. It’s going to take a lot of hard work from dozens of crew members in order to get the ship ready to head to San Diego and begin science operations, but the tour I took of the ship gave me a feel for how great it’s going to be to see the Sally Ride up and running.

I only counted five different colors of paint though – red, blue, white, beige, and grey. I’m on the lookout for the other three. UPDATE: I have since spotted both maroon and orange paint, so just one color left to find!