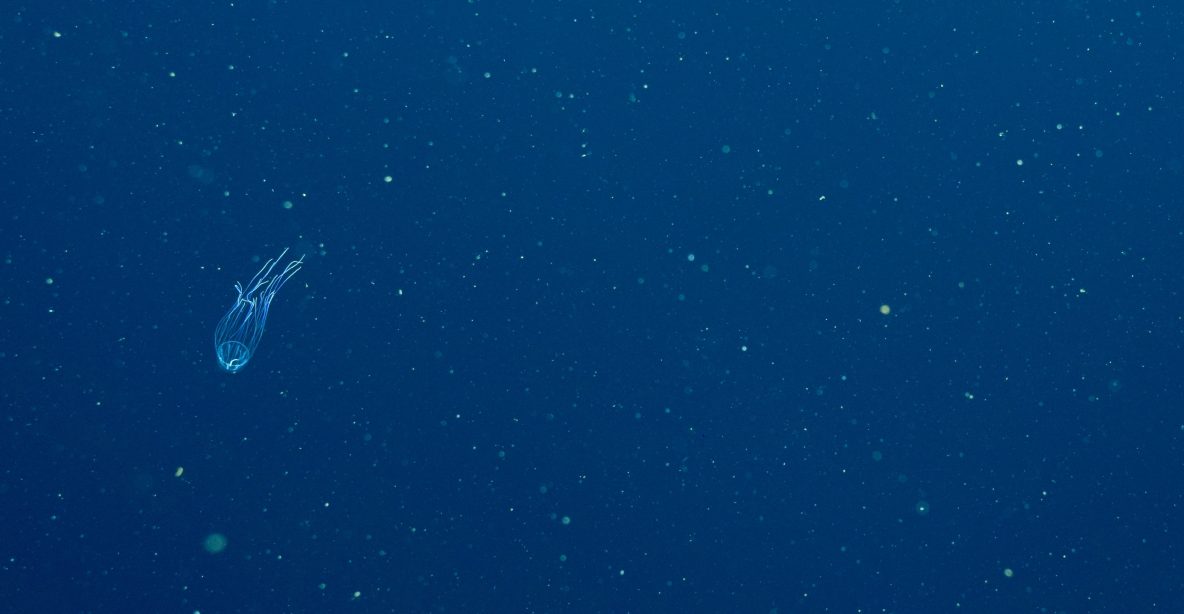 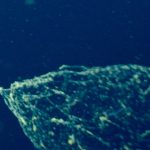 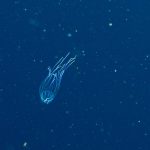 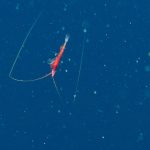 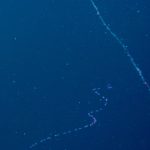 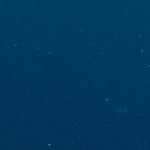 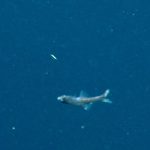 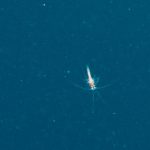 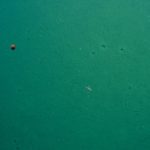 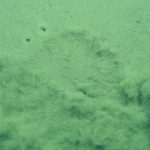 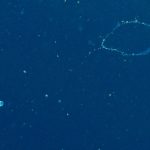 One of the many instruments onboard the multi-corer frame is a 24-megapixel camera that take flash photographs every 10 seconds. The camera belongs to the NSF-funded MISO (Multidisciplinary Instrumentation in Support of Oceanography) facility at WHOI, and is designed to visually document the area of the seafloor where core samples are taken. An added bonus of taking pictures during the descent and ascent through the water column is that sometimes it captures critters. The slideshow above contains photographs taken by this camera during the first test of the 8-place multi-corer, shown below. 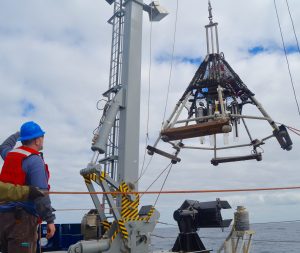 The multi-corer is launched over the stern. The two strobe
lights for the camera are visible on the lower rung.

The photo of the seafloor will be used to supplement information determined from the core samples themselves. As you can see, the first shot gives a nice view of the type of sediment on the surface of the seafloor. In the second shot, it’s been disturbed by the movement of the multi-corer. Subsequent shots (not included) are mostly dark and murky, as the sediment is kicked up by the landing of the package. A few minutes later, once the multi-corer begins to rise and is rinsed off, the pictures clear up again.

In this instance, no viable core samples were recovered. There are many factors that could have caused cores to either not be taken properly, or to fall out on the ascent. That’s why R/V Sally Ride is conducting these science verification cruises, to work out the kinks. Weights have been added, problem triggers were adjusted, and measurements have been double-checked. The multi-corer will be reset and sent back out, until we get it right! Stay tuned for further updates.

Thanks to Dr. Amanda Netburn (NOAA), Natalya Gallo (SIO), and Dr. Pete Davison (SIO) for identifying the critters we caught on camera. Click on each to see a bigger photo.

– Seafloor, Scyphozoan jellyfish and longspine thornyhead
– Seafloor, being disturbed by the multi-corer movement, with the same thornyhead
– Hydromedusa (we collected one of this species on the Jason cruise- was surprisingly tiny and transparent)
– Sergestid shrimp
– Siphonophore
– Abandoned larvacean house (tadpole-like larvaceans filter-feed through a large mucous net that is referred to as a “house”- these clog easily, and are abandoned by the animal multiple times a day)
– Schyphozoan jellyfish (this order contains what most people think of when they think of a jellyfish)
– fish (ID pending)
– Mysid shrimp
–  Narcomedusa (lower left) and Siphonophore (upper right)
Photos thanks to the Woods Hole Oceanographic Institution’s Multidisciplinary Instrumentation in Support of Oceanography (MISO) facility, funded by NSF (National Science Foundation).